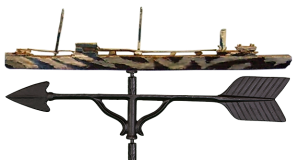 The French Navy spent most of the war as warships of a neutral power. Part of this is reflected in the details of paint on the destroyers.
B and X Turrets were painted with blue white and red bands, On French ships the blue band was always forward. Geupard also had these stripes on Q turret, and Valmy had them on a locker just forward of the after stack. They carry their division assignment numbers on the side in red paint. The letter “X” was used for large destroyers and “T” for smaller destroyers. The first digit indicated the division number, and the second was the relative seniority of the ships commander. The numbers I used were actually carried at some time, although the numbers did change during the course of the war. The large destroyers carried stripes on the second funnel to indicate their division. The smaller destroyers carried them on the forward funnel.
1st – one white, 2nd – one black , 3rd – one yellow, 4th – one green, 5th – one red, 6th – one blue, 7th – two white bands, 8th – two yellow bands , 9th two green bands.
L’Audacieux is painted as of her service with the Free French.

Find me here, too: